דף הבית / Where to Travel / The Eli Cohen Trail

The Eli Cohen Trail is a driving trail (as opposed to a hiking trail) that connects eight sites related to the life and work of Eli Cohen – as a spy for Israel – in Syria. The sites are presented here from south to north (although it’s definitely possible to drive the trail in the opposite direction).
The idea and creation of the Eli Cohen Trail is the brainchild of Gil Brenner, who is a licensed tour guide. The sculptor who created the beautiful stone sculptures is Yuval Lupan of Kibbutz Ginosar.

Our first stop, Site #1, is adjacent to Hamat Gader

When we arrive at Hamat Gader, we will park on the northern side of the site, and walk past the electric parking barrier in the parking lot corner (next to the fence). From there we’ll continue another 150 meters into the next parking lot.

The site is at the edge of the lot, on the far side of the fence. There is a large stone, engraved with a cluster of grapes carried by two people, which is a Biblical reference to the spies that Moses sent to scout out the land. The silver-colored “sound station” (you can push the button in English or Hebrew) will tell you the story of the adjacent abandoned building that used to be a hotel, in which Eli Cohen was a guest when visiting the Syrian El-Hama resort.

We are now at Site #2, which is on Road 98, at the intersection where the road to Hamat Gader meets the road that ascends to the Golan. We’ve travelled approximately 2 kilometers since we left the first site. On the right-hand side of the road is an old cement building that has a profile of Eli Cohen on its wall. We will carefully stop here and park off the road (there is no parking lot here).

Inside the building, we can see pictures of Eli, as well as the travel permits that are engraved in metal and displayed on the wall. And why are they displayed here? Because this building was a Syrian Army guard station that allowed only those with a special travel permit to enter the area. Due to the large number of Syrian army bases in the Golan, it was a Closed Military Area at the time.

Here we can also enjoy a beautiful view of the Yarmukh River and the Israeli-Jordanian border.

Site #3 is on Road 98, as you ascend to the Golan (we are approximately 4.5 kilometers from the last site). On our left, we can spot a small parking lot, to the right of which are a number of large cement blocks (please take a left-hand turn on the dashed white line only!). The cement squares served the Syrian army as “tank-blockers”. On the block closest to the road, there is a sculpture shaped like the head of a man facing four directions. These four faces symbolize the capabilities of Eli Cohen to function as a spy and present different faces (or sides; in Hebrew it is the same word) of himself.

Site #4 is inside Kibbutz Afik. From Site #3 we drove 13 kilometers north, turned into the kibbutz, and drove past the gate. At the roundabout, we turned left and left the traffic circle at the third exit. At the next intersection, we turned right, and we drove on the perimeter road of the kibbutz until the old cement building located on the left-hand side of the road, next to the kibbutz fence.

This building was the Syrian Officers’ Club on the Fik Army Camps, and Eli Cohen stayed here a number of times. On the porch is a sign that says “Mt. Nevo Porch”, since here Eli Cohen stood and looked with yearning eyes from an enemy country towards the Land of Israel, which he could not cross freely. This is very similar to the Biblical Moses, who while standing on Mt. Nevo, yearned to enter Israel. Next to the building are picnic tables and benches, and a beautiful view towards the ancient city of Susita (Hippos), and to Nachal Ein Gev. There is a “sound station” nearby that explains about the site in detail.

Site #5 is at the Moshav Eliad Junction. When we left Site #4, we drove north on Road 98 for 6 kilometers. We passed the entrance to Moshav Eliad, and parked next to the bus station.

Moshav Eliad is named for Eli Cohen. At this site, we can see a boulder right next to the fence of the  IDF El Al Army Base, which used to be a Syrian army base, too. On both sides of the boulder are cypress trees. Next to it is a “sound station” that explains the capture and hanging of Eli Cohen in May of 1965. Eli’s indictment is engraved on the stone; he was accused of unlawful entrance to a Syrian Closed Military Area, using a false identity, and unlawful crossing of the border.

Site #6 is adjacent to the intersection at the entrance to the village of Hispin. From Site #5, drive approximately 6 kilometers north on Road 98. About 100 meters north of the intersection, on the right-hand side of the street (as you drive north), is another boulder. The sign on the stone tells how Eli Cohen drove on this very road between the Syrian army camps. The boulder was placed on the spot where remnants of a Syrian road were found that stretched from Kuneitra in the north to El Hama in the south. There are cypress trees on each side of the stone, as well as picnic benches for visitors.

Site #7 is located near the old headquarters building of the Syrian Army. To arrive here, we drove north on Road 98 for 38 kilometers. When the road took a very sharp turn left, we turned right and drove on a dirt road that ends at a parking lot in front of a large and impressive cement building.

This building housed the headquarters of Syrian Military Intelligence in the Golan. In the parking lot you will find a sculpture of a lock with a large keyhole that symbolizes Eli Cohen’s skill in unlocking the secrets of Syria. Eli Cohen visited this building a number of times while he stayed in Syria. (The building itself is unsafe and unstable, and we will remain outside in the parking lot.)

We are now at Site #8, on the road at the foot of Mt. Avital. We left Site #7, returned to the main road, and took a left turn, driving for 2 kilometers south, and then turning right towards Kibbutz Merom Golan. The road is narrow and passes by the valley between Mt. Avital and Mt. Bental. About 200 meters after we turn on this road, on the left there is a sculpture on a hill facing Syria. This is the last station on the Eli Cohen Trail, and it depicts a mother and three small children. This symbolizes the yearning of Eli Cohen’s family – his widow Nadia, and their three children – for the return of Eli from Syria, and his burial inside the State of Israel. 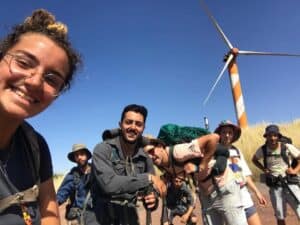 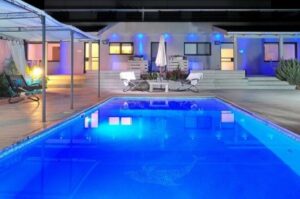